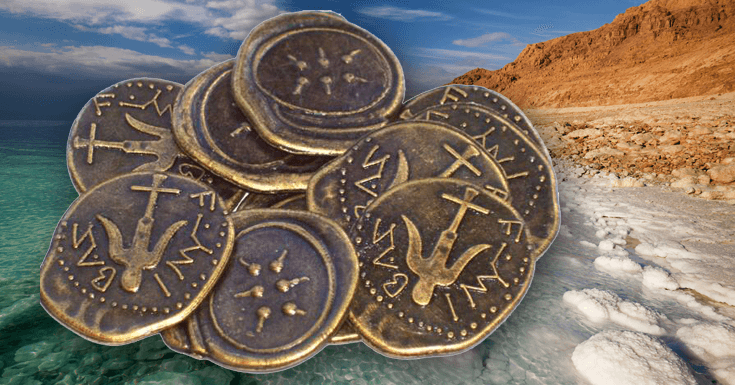 Who threw away the Dead Sea Treasures ?

Mystery on the Shores of the Dead Sea

An unusually large collection of coins from the period of Alexander Jannai (127BC- 76BC) was discovered near Qumran.  The question is how the treasure got there???

For a number of years, among antiquities enthusiasts in Israel reports have been circulating of a huge treasure of coins found on the shores of the Dead Sea, not far from Qumran, were the Dead Sea Scrolls were found. 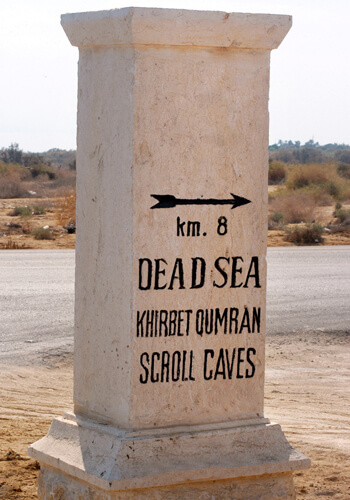 The special feature of this Dead Sea treasure is the huge number of coins – there are about 300,000!!!  This is unprecedented for collections of coins found in Israel, perhaps even anywhere in the world.  It is also interesting to note that nearly all the coins are from one series:  coins of one Pruta from the time of the Hasmonean King Alexander Jannai, who reigned from 127 BC to 76 BC.

Most of the coins have been preserved in relatively good condition, since they rested for over two thousand years at the bottom of the Dead Sea, whose waters contain little oxygen. Their discovery now was made possible because the Dead Sea has shrunk considerably in the last few years, and anyone bathing in the shallow water could have found them

One side of the coins is stamped with a ship’s anchor, and the words “King Alexander” in Greek.  It is possible that Alexander Jannai wanted the anchor to symbolize his conquest of all the coastal towns in the Land of Israel, from Acre in the north to Gaza in the south.  The other side of the coins bears the image of an eight pointed star, surrounded by a royal crown.  Between the points ancient Hebrew letters spell the words “King Jonathan” (Alexander Jannai’s Hebrew Name).

The huge number of coins of such low value raises the question, how did this hoard get to the place where it was found?  Who discarded, or hid such a quantity of coins, with a total weight of almost 200 kilograms?  And why?

The Treasures Location Suggests Some Hypotheses

Nearby is an ancient Israelite fortress and next to it a jetty where boats were tied up in ancient times.  It is very possible that sacks containing these coins fell from one of the boats during a storm.

For whom were such sacks of coins intended?  Perhaps to pay the salaries of the soldiers of Alexander Jannai serving in the area, or perhaps the soldiers stationed at the fortresses on the eastern side of the Dead Sea?

Another interesting suggestion is put forward by archaeologists Hanan Eshel and Boaz Zissu.  Eshel is an experienced researcher and expert on the Qumran and Dead Sea sites, and together with Zissu he published an article on the phrase “Take them to the Dead Sea” found in the writings of the Hebrew Sages. Apparently there were several customs in the Talmud dealing with coins given to the Temple but which for various reasons could not be brought there, and these should be “taken to the Dead Sea” and lost.