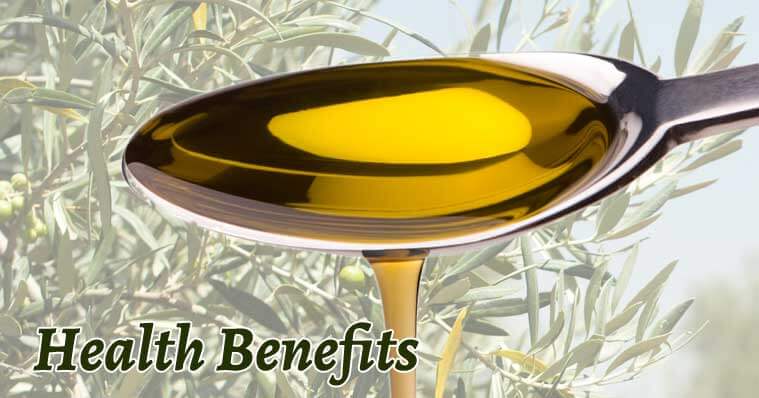 The Health Benefits of Olive Oil

Extra Virgin olive oil is not only a light and delicate addition to many wonderful dishes; it is one of the most health-promoting types of oils available.

Protection against Chronic Degenerative Disease: In many parts of the world, a high fat intake is associated with degenerative diseases such as atherosclerosis, diabetes, asthma, colon cancer, and arthritis.

But in some places a high fat intake is actually associated with lower rates of these conditions. Comparing these areas, such as the Mediterranean, where olive oil is the main fat used, to other regions, like the United States, where other fats such as animal fats, hydrogenated fats and vegetable oils like corn oil dominate, provides very interesting data. People who use olive oil regularly have much lower rates of heart disease, atherosclerosis, diabetes, colon cancer, and asthma.

Strong Protection against Heart Disease: Relying only on olive oil may cut your risk of coronary heart disease almost in half, according to results from the CARDIO2000 case-control study, published in Clinical Cardiology (Kontogianni MD, Panagiotakos DB, et al).

The researchers concluded, “Exclusive use of olive oil during food preparation seems to offer significant protection against coronary heart disease, irrespective of various clinical, lifestyle and other characteristics of the participants.”

Studies examining olive oil use and atherosclerosis reveal that particles of LDL cholesterol (the potentially harmful cholesterol) that contain the monounsaturated fats of olive oil are less likely to become oxidized. Since only oxidized cholesterol sticks to artery walls eventually forming the plaques that can lead to a heart attack or stroke, preventing the oxidation of cholesterol is a good way to help prevent atherosclerosis. A recent in vitro study also showed that polyphenolic compounds present in olive oil, including oleuropein, inhibit the adhesion of monocyte cells to the blood vessel lining, a process that is involved in the development of atherosclerosis.

A study published in the Medical Science Monitor reported that two tablespoons a day of olive oil added to an otherwise unchanged diet in 28 outpatients, ranging in age from 64 to 71, resulted in significant drops in total and LDL cholesterol.

The Greek team examined the ability of the total diet and of olive oil alone to reduce arterial blood pressure. Their study included over 20,000 Greek participants who were free of hypertension (high blood pressure) when the study began. Food frequency questionnaires were completed and systolic and diastolic blood pressures were taken.

Key to Reducing Breast Cancer: Olive oil may be the key reason that eating a Mediterranean diet reduces breast cancer risk, suggests a laboratory study published in the Annals of Oncology.

This human study adds to the evidence that olive oil is a key factor associated with a Mediterranean diet in lowering the risk of breast cancer. Results of the two-year study involving 755 women in the Canary Islands suggest that monounsaturated fat and, specifically, olive oil, exerts a protective effect against breast cancer.

Anti-inflammatory Benefits: Regular use of olive oil has been associated with lower rates of asthma and rheumatoid arthritis. The monounsaturated fats in olive oil are used by the body to produce substances which are relatively anti-inflammatory. By reducing inflammation, these fats can help reduce the severity of arthritis symptoms, and may be able to prevent or reduce the severity of asthma.

Olive Oil Phenols Help Prevent Bone Loss: The bone-protective effects of olive polyphones revealed in studies conducted by a special team at INRA (France’s National Institute for Agricultural Research) are so dramatic that a new Belgian firm, BioActor, has licensed INRA’s patents to use olive polyphones in food, supplements, and herbal medicines for osteoporosis prevention.

Olive Oil Phenols Protect DNA from Free Radical Damage: Extra virgin olive oil, which, when properly cold pressed and stored in opaque containers, is naturally high in phenolic compounds with antioxidant properties, may be one of the key reasons for the lower incidence of cancer and cardiovascular disease in the Mediterranean region, suggests a study published in the British Journal of Nutrition.

Potent Anti-inflammatory Compound Discovered in Olive Oil: Could olive oil become the new anti-inflammatory standby? Someday soon, your doctor may recommend that you prevent aches and pains, and reduce your risk of cancer, by enjoying extra virgin olive oil with your meals throughout each day, suggests a study led by Pennsylvania biologist Dr. Gary Beauchamp and published in Nature.

A Fat That Can Help You Lose Fat: Substituting olive oil, a monounsaturated fat or MUFA, for saturated fat in your diet can translate into a small but significant loss of both body weight and fat mass without the need to change anything else about your diet or increase your physical activity, suggests a study published in the British Journal of Nutrition.

What Is the Mediterranean Diet?

It is based on what from the point of view of mainstream nutrition is considered a paradox: that although the people living in Mediterranean countries tend to consume relatively high amounts of fat, they have far lower rates of cardiovascular disease than people in countries like the United States, where similar levels of fat consumption are found. One of the main explanations is thought to be the large amount of olive oil used in the Mediterranean diet.

“…And cinnamon and spice and incense and perfume and frankincense and wine and olive oil and fine flour and wheat and cattle and sheep.” (Revelation 18:13)