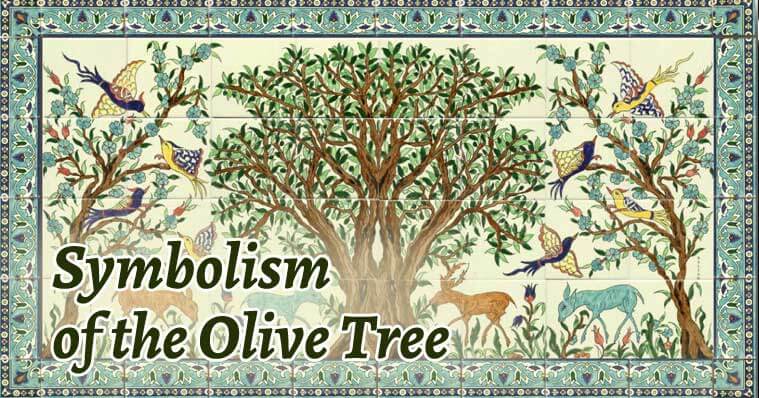 The olive tree, which has been an important component of Jewish and Israeli culture throughout history, has become a symbol of many values in Jewish life.

The olive is one of the seven species with which the land was blessed. It is mentioned frequently in the Bible in the context of blessings, fruitfulness, and health.

Eventually it became linked to the concept of putting down roots in the land, and therefore the olive branch appears in the emblems of the State of Israel, and of the Israel Defense Forces, and is also a symbol

of peace, referring to the story of Noah’s Ark and the dove.

It is obvious that the olive tree symbolizes stability and tranquility. Moreover, the olive symbolizes the eternal link between man and the earth.

In biblical times olive branches were used to make wreaths for the heads of young men and women on festivals and at their weddings.

The pilgrims bringing the first fruits to Jerusalem decorated the horns of the young bull who led the procession with olive branches.

The whole of the olive tree, its branches and fruit, have been used as symbols and decorative motifs in many works of art and in Jewish culture from historical times to the present.

Jeremiah likened the people of Israel to the olive: “The Lord called your name, a green olive tree, beautiful with goodly fruit.” (Jeremiah 11:16).

himself to an olive:“But I am like a thriving olive tree in God’s house; I trust in the faithfulness of God for ever and ever.” (Psalm 52:10).

The contrast between the green canopy of the olive tree and the sturdiness of its trunk with the signs of old age in the crevices of its hollow trunk forms the foundation of a legend told by the ancestor of the Jewish people, as follows:

When King Solomon died, the trees of the garden also mourned – the fig, the vine, the pomegranate. As a sign of grief they shed their green leaves. Only the olive tree did not shed its leaves and stood with the glory of its green canopy. The other trees asked the olive: “You, king of the trees, is it not most unbefitting for you not to mourn the death of our King?” The olive tree replied, “You have shed your leaves so that all might see your sorrow, but my sorrow is hidden in my heart and it is greater than yours, for behold, my heart is dry and the sap of my trunk has withered!”

A similar tale is told about the olive and the destruction of the Temple.

The Emblem of the State of Israel

The official emblem of the State of Israel is a seven- branched candelabra decorated on both sides with olive branches. The candelabra and the olive branches are taken from the vision of Zechariah: “And he said to me, “What do you see?” I said, “I have seen, and behold, a lamp stand all of gold, with its bowl on the top of it, and its seven lamps thereon; there are seven pipes to each of the lamps, which are on the top of it; and two olive trees by it, one on the right side of the bowl, and the other on the left side of it” (Zechariah 4:2-4).

In the book of Zechariah, the two olive branches are light to the candelabra and symbolize two types of leaders of the people of Israel in ancient times: the high priest from the family of Aaron, and King David of the house of David.

The emblem of the IDF combines three motifs: the Magen David, a sword, and an olive branch. The sword and the olive branch are also on the badge given to graduates of the IDF Officers Course.

The emblems of many places in Israel, such as the cities of Haifa and Ramla, are decorated with olive branches.

Some people keep an olive leaf in their wallet as a good luck charm.

“…Then you shall take the anointing oil and anoint the tabernacle and all that is in it, and consecrate it and all its furniture, so that it may become holy." (Exodus 40:9)